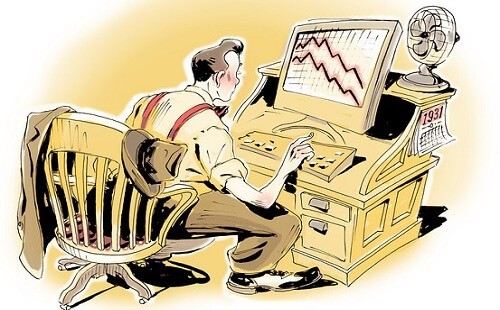 Ben Graham, the father of value investing, once said of the stock market, “In the short run, the market is a voting machine but in the long run it is a weighing machine.” To Graham the market was like a popularity contest. Investors “vote” for a stock out of considered enthusiasm for its prospects. Results however are determined in the long run as profits are “weighed” year after year and intrinsic value is revealed.

Voting, of course, is the defining mechanism of a representative democracy, and America voted for a new president last year. Like the market, the voting machine of American opinion rendered its choice, but the results of that choice will only be known in the future as the next four to eight years unfold. Greater changes appear in store under this administration than any in recent memory, yet we believe other factors may prove more impactful economically. In this commentary, we review our approach to the current market environment, discuss the factors we believe are likely to have the greatest impact on financial markets, and summarize our view of key policies under consideration by the new administration.

Our mission is to protect first, profit second. Today is a time to protect. Factors that we believe will have a major impact on future financial market returns are the level of equity prices, interest rates, credit spreads, and the economic cycle. Equity prices are high, interest rates are low, credit spreads are narrow, and the US economic recovery is mature. The stage is set for low future financial market returns.

The financial markets are in a different kind of bubble. The traditional definition of a bubble includes a mania, an important psychological element which seems missing today. Our definition of a bubble is simpler. A bubble in our view occurs when asset values are significantly higher than justified by the probable future income generated on the stock of productive assets.

Before discussing the economics of productive assets, we think it helpful to classify today’s bubble: it is a central bank reflation bubble rather than a classic mania driven bubble. Excess liquidity and low interest rates have pushed asset prices higher over the past several years. This is not to say that central banks are to blame. It is unclear that they could have done anything else. Indeed, they likely helped to prevent the Great Recession from turning into a Great Depression. Nevertheless, reflation can create its own set of problems.

The economics which equilibrate asset values and productive assets generally work well at the firm level. A firm will buy existing assets if they are cheaper than investing in new productive assets, and vice versa. The problems arise at the macroeconomic level. Central bank actions and other capital market mechanisms designed to spur new investment may not work under certain conditions. Examples of cases under which central bank actions are likely to prove impotent are when resources are fully utilized, yields are near zero, or future sales that justify expansion are not forthcoming.

To illustrate further let us say that the central bank engages in open market asset purchases which lower interest rates. One key objective of lower rates is investment in new productive assets and additional capacity to absorb the central bank funds. However, if firms do not invest, asset values may rise without an attendant increase in productive asset capacity.

The exact reasons why central bank actions can prove ineffective are beyond the scope of this commentary, but suffice it to say that we believe asset values are high and remain skeptical that supernormal future growth will generate the cash flows necessary to justify them. The following two charts help illustrate our point.

The first chart shows historical prices relative to ACR’s cyclically adjusted S&P 500 GAAP Earnings per Share. The only time prices were higher relative to earnings was during the greatest equity market bubble in US history. Some suggest that GAAP earnings of publicly traded companies are understated. Our company level work generally suggests otherwise. The second chart illustrates another reason why earnings are unlikely to be understated. Corporate earnings have risen faster than per capita GDP in recent years as earnings have taken a rising share of GDP compared to wages. Mathematically this cannot go on forever; politically the runway may be even shorter.

While market psychology is far from maniacal, the next chart shows that consumer confidence is back to pre-financial crisis levels. Investors seem more concerned again with return on capital rather than return of capital.

Below is an abbreviated summary of our view on key policies under consideration by the new administration. While we are skeptical of the ability of any administration to materially change the long-term growth path of the US economy, and even more skeptical of our ability to forecast whether such a change will occur, executive and legislative policies can have a direct impact on our portfolio companies and valuations, which is why we monitor them closely.

Corporate income taxes. Permanently lower corporate income taxes are likely, and they will be positive for the valuation of most US companies. The details will be important. A cash flow based tax and border adjustment could create winners and losers, although currency adjustments are likely to mitigate some of these effects. As the year unfolds and the new tax regime comes into clearer focus, explicit tax based adjustments to our valuations will be necessary. While we expect a positive increase in value for many companies, we do not expect the overall impact to radically change our view of general corporate valuations.

Regulation. The US economy is likely to benefit from less regulation. While it could make business conditions more volatile, the increase in volatility is likely to be offset by higher productivity. Nevertheless, the benefit will still be marginal. Growth in our opinion is not capable of permanently rising, say from 2% to 3-4% annualized, solely based on changes in regulatory policies. A ¼% to ¾% annualized increase may be possible over a 10-year period, but no one really knows.

Personal income taxes. Personal income tax cuts are likely to be modestly stimulative. ACR’s macroeconomic adviser Steve Fazzari has put together a simple analysis based on discussions in the press of possible personal tax changes. The analysis illustrates possible effects rather than a forecast of future outcomes. It shows that the reported tax cut plan could create a one-time benefit of 1-2% of GDP (Steve’s estimate is 1.4%). Interestingly, if the same government revenue cost was distributed equally across all taxpaying households, Steve’s assumptions suggest a demand stimulus about four times larger, given a higher propensity to consume among lower income taxpayers.

Trade. Trade is the wild card. In our opinion the administration’s trade policy is misguided. A short-term “sugar high” is possible from protectionist policies, but long-term productivity would likely suffer and more than offset any short-term benefits. Reducing our trade deficit could cause a modest, one-time increase in GDP. However, meddling in business decisions on how to best reduce costs and ignoring the clear benefits of comparative advantage in international trade is in our opinion economically wrong-headed. The most hopeful outcome would be if the new administration negotiated better pro-global trade deals for the US, provided support for displaced workers, and let the market do its job.

In short, the economic policies of the new administration on tax and regulation are likely to be modestly positive, whereas trade is a wild card and could be negative. The administration’s more contentious policies on healthcare, immigration and the environment are far more political than directly macro economically impactful, and therefore outside the scope of our discussion. Yet they raise one last item of importance. America voted for change, and we are getting it. ACR welcomes the upside of positive changes to our political and economic system. Yet ACR is also inherently focused on risk, and the risk is that wrenching changes to complex political and economic systems produce unintended consequences.

Not in recent memory has there been such a wide chasm of difference in public opinion on matters of political importance. Some are adamant that the US is headed for disaster; others are hopeful that a new age of prosperity is at hand. Our view is that neither extreme is correct. The US economy and political system are bigger than any person or party. We will chug along as leader of the free world for many years to come and will continue to forge our way forward after inevitably stumbling along the way. Democratically driven strife has made us who we are; and in this sense, whatever lies ahead is likely to make us stronger.

Engaged Capital Calls on the Board of Rent-A-Center Inc. to Immediately Begin a Strategic Alternatives Process